Tonia Gray preselected for the Greens in the seat of Kiama 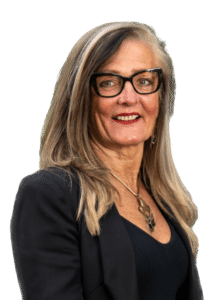 We are excited to announce that Tonia Gray has been preselected as the Greens candidate for Kiama in the March 2023 State Election.

In support of her decision, Tonia said “I’m running because more capable women are needed in politics. Our local communities are demanding transparent and honest decision making. Inappropriate development is a serious threat to our local coastal communities and the current Coalition state government has sidelined local input into planning decisions.

“The current government has done nothing to address housing affordability and emergency accommodation,has widened the inequality gap, and transitioned too slowly into renewables. NSW’s education and health systems are beyond breaking point, we are haemorrhaging good people. Our youngest and brightest are the invisible casualties of COVID confronting the uncertainty of life due to ten natural disasters in three years.”

As the new State member for Kiama, Tonia will commit to working towards a fairer, healthier and cleaner future for NSW. She sees this being achieved through five principal tasks:

Tonia believes that a change in Kiama’s representation will help change the broken state leadership model.  “Moving to a socially just, ecologically sustainable, and clean economic future for us all are my core objectives” she said. “The Greens in NSW have a comprehensive 50 point policy plan to support those objectives”. 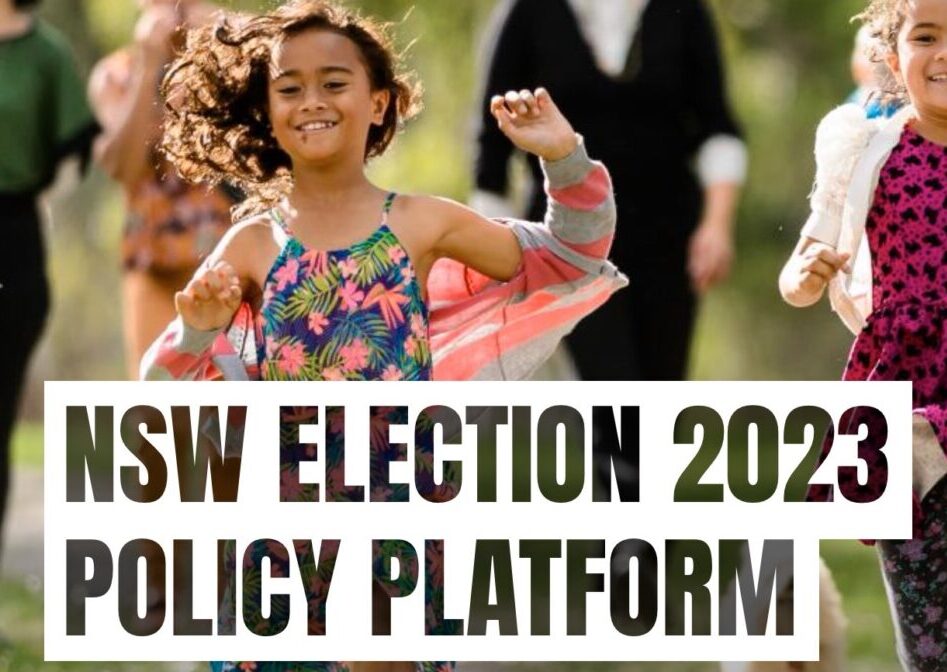 The Greens Policies in Detail

Click here to see the broad spectrum of Greens Policies which are the basis of the Greens campaign for the March 2023 State Election. Check out the policies to see why the Greens should have the balance of power in the next State Parliament.
Read More 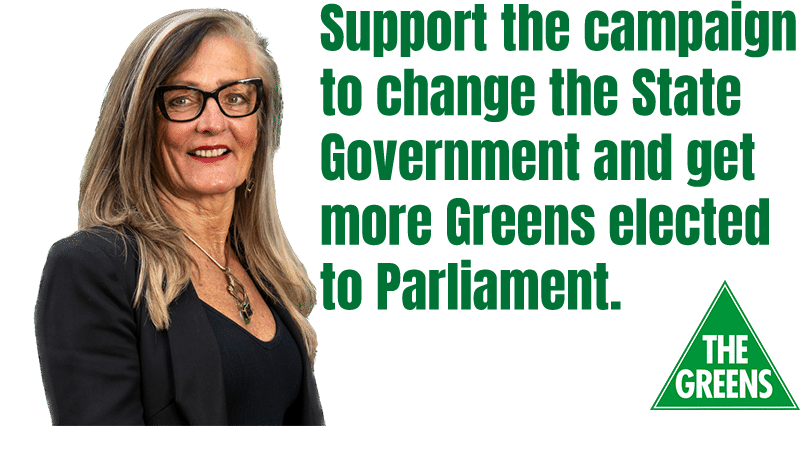 Help with the campaign

There are many ways that you can help support the campaign to achieve a change of government and greater Greens representation in the NSW Parliament. (A) Donate to the costs of running the campaign (B) Attend and or help organise the campaign events (C) Have a campaign poster in your...
Read More 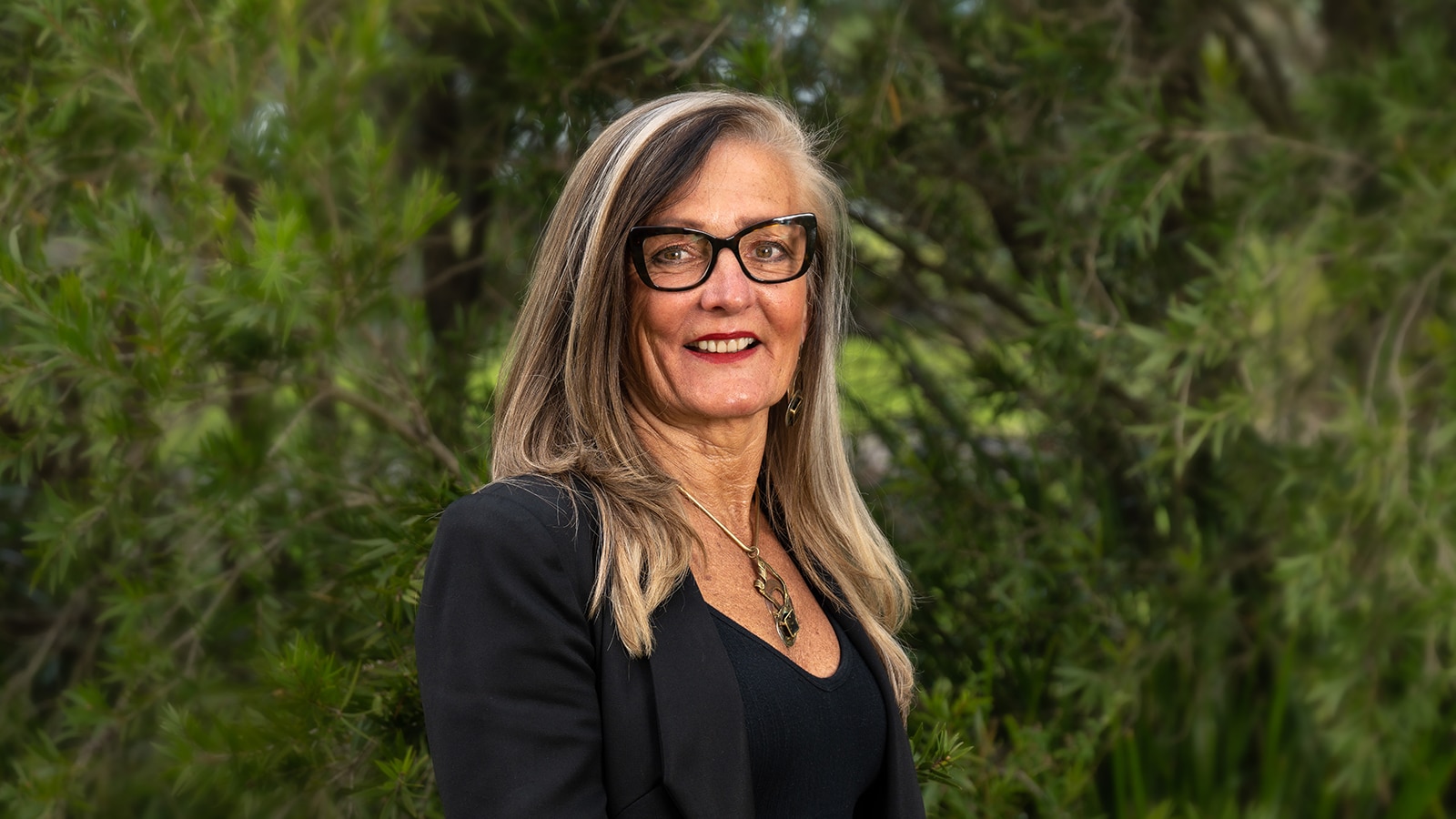 Tonia Gray preselected for the seat of Kiama

We are excited to announce that Tonia Gray has been preselected as the Greens candidate for Kiama in the March 2023 State Election. Tonia, who currently lives in Berry, is a Ward 1 Councillor on Shoalhaven City Council and is a Professor in the School of Education at Western Sydney...
Read More 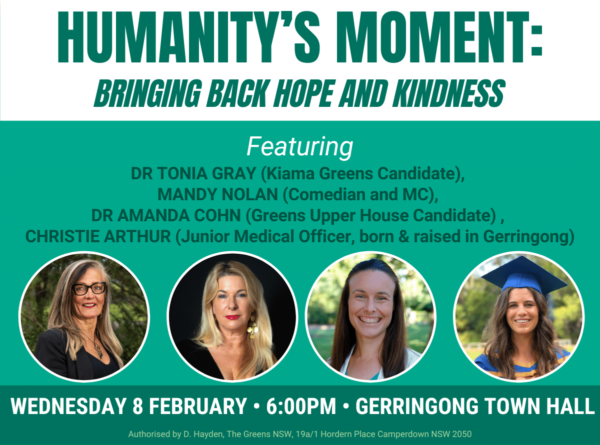 The next event in the campaign is an evening of comedy and discussion with Mandy Nolan (Comedian and MC), Dr Tonia Gray (Greens candidate for Kiama), Dr Amanda Cohn (Greens candidate for the NSW Upper House) and Christie Arthur (June Medical Officer, born and raised in Gerringong). Click here to...
Read More 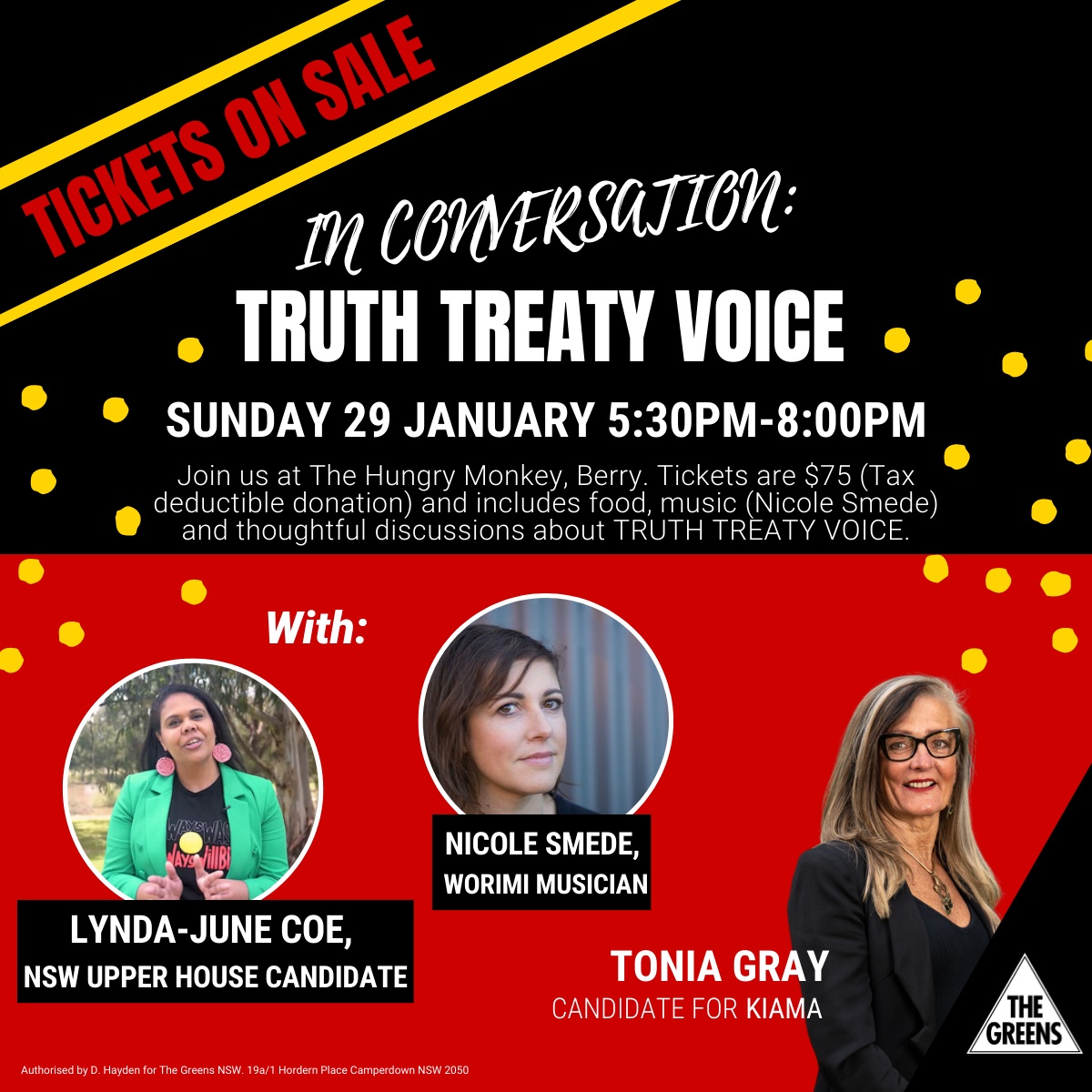 Lynda-June is a proud Wiradjuri and Badu Island woman from Erambie Cowra NSW.  She is an educator, activist and PhD student at Macquarie University.  Lynda-June is currently the Family Wellbeing and Campaign Manager with the Dhadjowa Foundation supporting First Nations families who have been impacted by deaths in custody. “I...
Read More 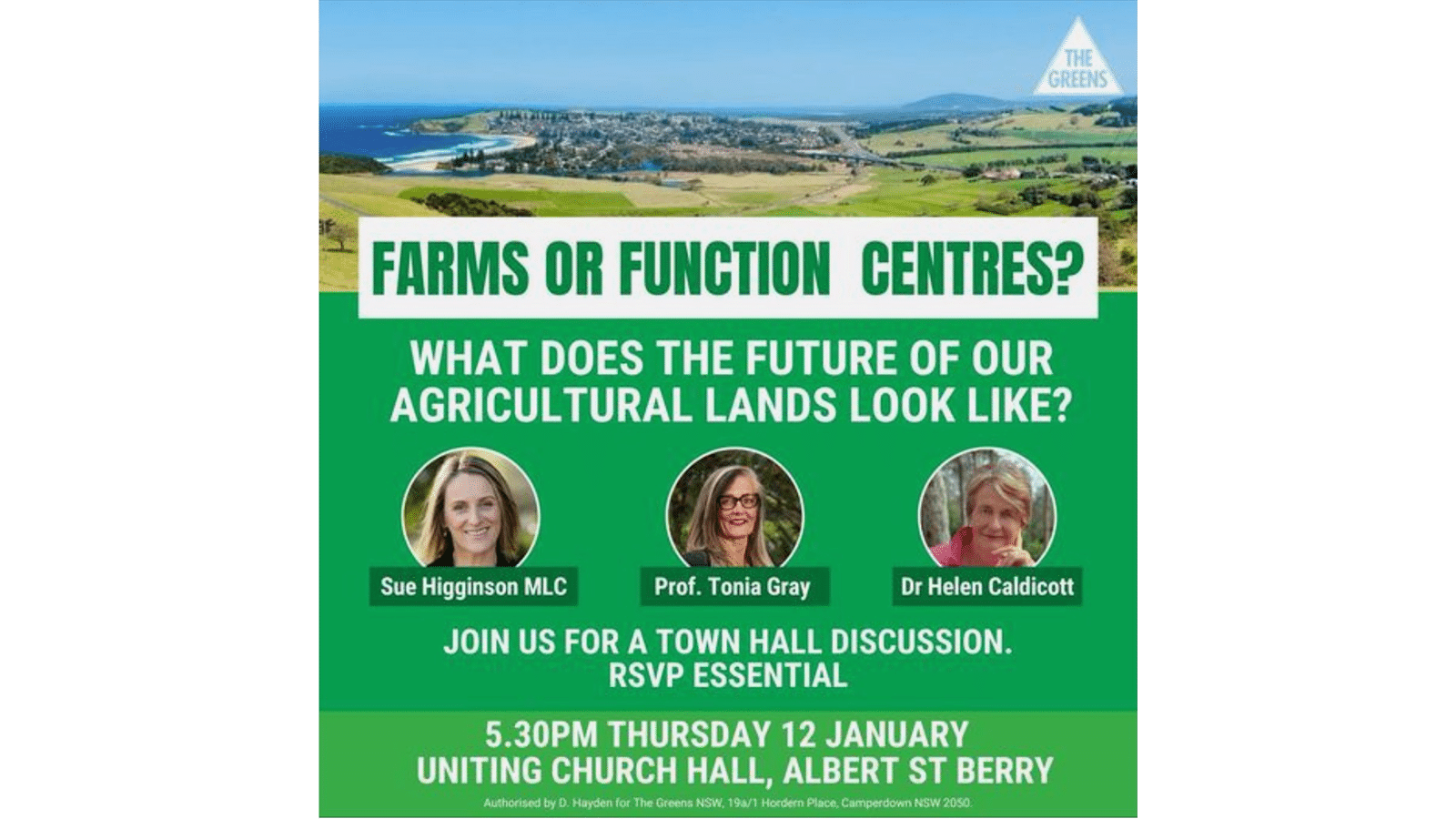 The Greens candidate for the seat of Kiama, Professor Tonia Gray, is taking on the task of highlighting the threats to one of the electorate’s key resources. "The Kiama electorate is the home of some of Australia’s most rich and productive soils and combined with the excellent local rainfall they provide the...
Read More 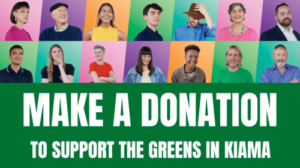 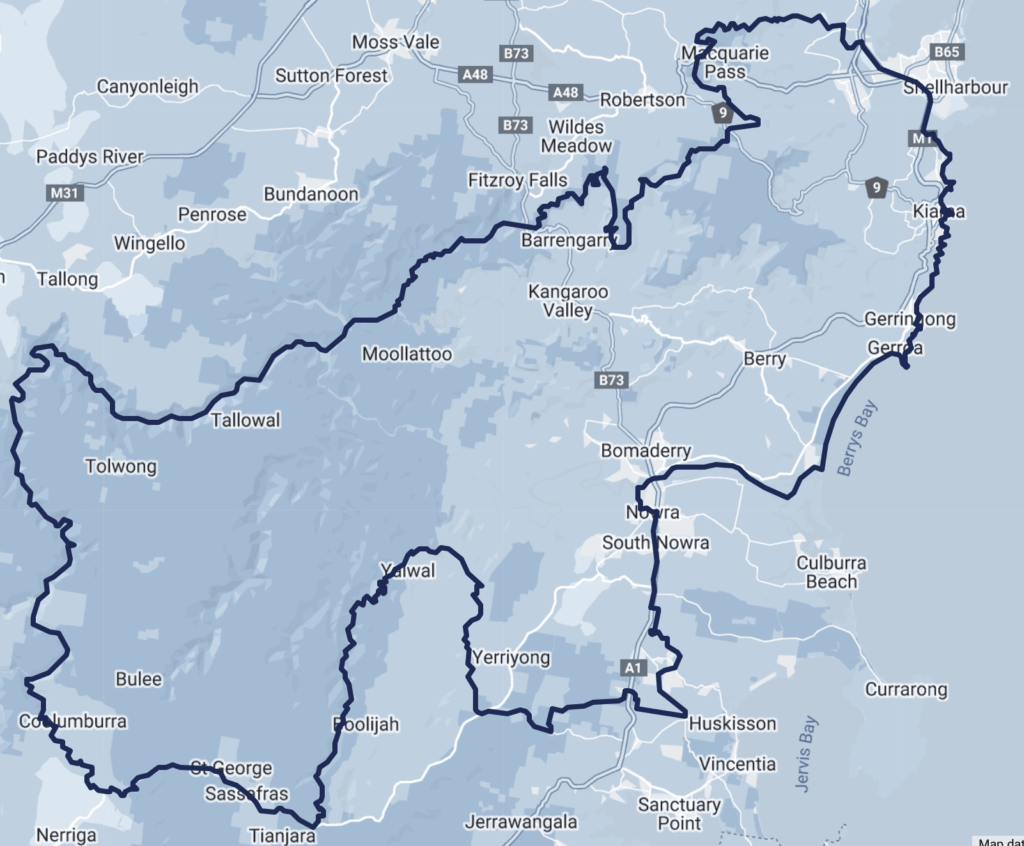